About a week or so a go, probably longer, my Scary smart daughter was messing with the buttons on the TV.  She's almost two and buttons are fascinating. After already telling her 5 or six times to stop I go in and remove her from the TV point at her and tell her to listen to momma, and stop pushing buttons. Well she raised that angelic little head, stomped her darling little toesies, jabbed a cute little finger in my face and bellowed "NO!" I had to try so hard not to laugh.
Right on the heels of her telling me off, we are now both in the living room, me checking a text, her playing quietly. Slowly she goes and picks up her doll, Baby (creative name right?) and starts to inch her way back over to the TV. As i sit there watching her, she takes baby's hand and reaches it out and pushes the button on the cable box. "Georgina!" I say, "No buttons! Get away from there." Startled she runs back over to where I am, baby in tow, and looks over at baby in shock "Baby!" She says pointing, "Bad baby!" she now scolds her toy. Seriously, it's hard to be mad at this child.

George is getting to clever for my own good, shes a schemer. Like her father. Sometimes it's a bit of a problem, other times its awesome! The other day while playing with her dad she took a magnetic letter "i" from the fridge, showed her dad, plamed it, put both hands behind her back, dropped it, opened her hands to show her dad. "Go?" she asked. My baby does magic.
Another example of her scheming ways, would be earlier this week while playing with her Grandma. And I mean some hardcore manic pillow and tickle fight running crazy. She looks up at me panting, "Water?" So I grab her a sippy cup (note, not a spill proof cup) and hand it to her. She promptly takes it and upends it over my Moms head while giggling mechanically. I swear shes a little bit evil.
She's also wicked smart, she can now sing good chunks of the ABC's, she can recite her numbers to 10. She doesn't really understand what she's doing, but shes got the words memorized. And she can recognize and identify a few letters. "H" and "W" being our favorites.  She can identify a few shapes and colors. And sing a handful of nursery rhymes. She can I dentify a ton of animals and tell you what they say. For example, a bear says " Wakka Wakka!" (Did I mention our love of the Muppet show?) Also in the Vein of the Muppets, George has memorized big chunks of Rainbow Connection, which she sings to herself over and over. I finally got some video! Please ignore my husbands interuption during "The lovers the dreamers and me" she sings so often he didn't realize I was taping, the Jerk.

Right from day one George has been a little girl, measuring on the very bottom of all the charts. She is still very tiny, Weighing in at about 18lbs and standing just over two feet, the bottom eighth percentile for weight and bottom twelfth for height. Like I said Itty Bitty. This in itself rarely causes problems, other than fact that her pants often fall down. Otherwise she is bright and active. She walks, she talks, she even does a couple of tricks. She is a well rounded, little, girl. Last Friday I had my first real encounter with another parent where Georgie's size was a problem.

We swim twice a week, Lethbridge doesn't have a lot of indoor activities for wee ones to run about. This particular pool has a nice wading pool that's rather warm and has a little slide. Well a bit over a week ago George discovered that she really loves the slide, and that she can do it all by herself. She rarely lets me help. She can climb out of the water in the deep end (about a foot and a half deep) walk over to the bottom of the slide, climb up the three steps, and slide down. As long as I'm there to catch her it's all good. She is however not quite eighteen months old yet so although she can do all this on her own, she's not overly coordinated and still learning. on one try she climbed to the top of the slide, tried to sit down and completely missed the step, she fell backwards off the slide onto the foam matting. George was obviously upset, I think surprised more than hurt. I scooped her up and started to walk away from the slide, when she abruptly stopped crying, signed and said "More" while pointing back at the slide. I put her down on top of it, she slid down happy as could be, climbed out and started all over again. She hasn't missed that step since.

Last Friday was considerably more busy than it been in a while. There was a rather large number of kids Georgie's age and up, a lot of them in the wading pool, a lot of them playing on the slide. as usual George wanted to slide and slide and slide, But being that there were so many kids I was hesitant to let her go, as she doesn't really understand lines ans waiting her turn, so instead we watched other kids play and flirted with some little boys (Seriously, she's going to be such a problem) When there was finally a lull in activity, most kids had been hauled off to the bigger pool by bored parents, George and I set ourselves up to play on the slide. After a couple of trips up and down, the little pool started to fill up again, and other children started to line up behind George, who was almost at the top. Again you must remember that George is only 18 months old and easily distracted and little kids don't always understand personal space, the line up growing (On the stairs, practically on top of George) became a bit of a stress for my toddler, she stopped climbing to try and figure out what on Earth was going on. Seeing a problem starting to develop I called to her and encouraged her to keep moving. Hesitantly she started to go again, but apparently not fast enough for the Dad waiting to help his little girl down the slide. Without consulting George or myself, He promptly scooped George up plopped her down and gave her an encouraging nudge down the slide before (Heavily) assisting his own daughter down.

I was stunned. George was stunned. Neither of us really knew how to react, so we slid away from the slide and sat in stunned silence for a few minutes until the slide cleared again and George could once again return to the play that she so loved. I was ticked off, clearly this man had thought I was a bad parent, he had shot me quit the look while "helping" George, and I had reacted poorly. I simply had no response to his "helping" my daughter. I try and be a bit hands off when it comes to play, particularly when George doesn't need or want my help. She's brave and smart and fully capable, so sometimes I sit back and let her explore her limitations without restricting her to what I think she should be able to do at her age, she'll prove me wrong every time. It's not the end of the world if she gets a little scared, or falls and gets a bruise, she'll learn and get right back up and try again.

As we were playing on the empty slide, the wife of the man brought their little girl up to play as well. She and I started to chat a bit as George successfully navigated the stairs and flew down into the pool giggling all the way. She asked me how old George was, I told her. Not uncommonly she was shocked, George is the size of an 12month old. "Did you hear that?" she called to her husband, "She's 18 months!" He also looked shocked, I asked how old their little one was. She laughed, "18 months". 18 months with a tiny vocabulary and needing a lot of assistance up and down that slide. I felt vindicated, clearly this man had thought George was much much younger than she was, and not only that but my kid (who's technically 17 1/2 months) was doing things their kid can't. My Kid Rocks!

George is way to damn smart, she can walk run and climb with the best of them, She has started to string together words, she can match, she can tell you what she wants and say please and thank you when she gets it, she can lie (more like fib) she can walk backwards. She is Brave and clever, she is empathetic, she constantly amazes me. George is is teeny tiny, and we are going to run into problems like this for a while. Hopefully I'll have a better response next time it happens 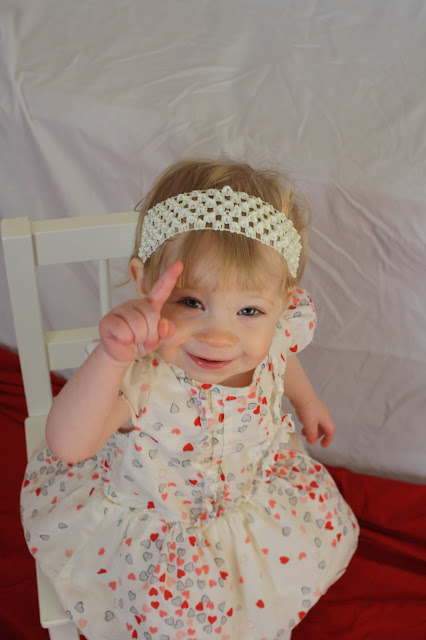